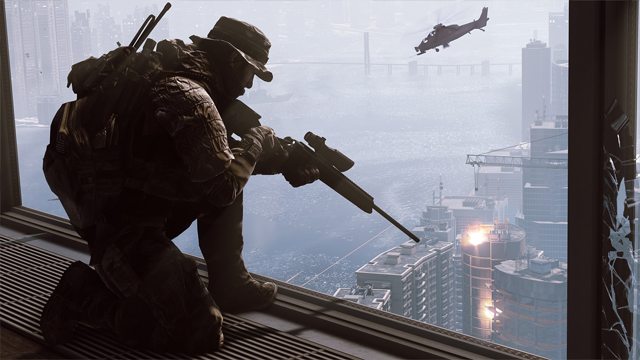 ​
Customization in first-person shooters has always been a gaming tradition. From weapon attachments, armor, explosive types and upgrades, players will always want to be able to have to have that unique ability to make their character or weapon their own. Well I'm happy to share that Battlefield 4 will have the "deepest and most personal customization ever."​
​
This time in Battlefield 4, there will be a greater variety of attachments to utilized and fit the player's exact play-style. The weapon stats in the menu have been redesigned to be more informative of how certain accessories will adjust your weapon. Knowing the damage, accuracy, stability, range and hip fire accuracy of a gun, will allow you to analyse and produce a more efficient weapon in combat. From handguns to light machine guns, there are at least 3x the number of combinations that can be applied compared to Battlefield 3.​
​ 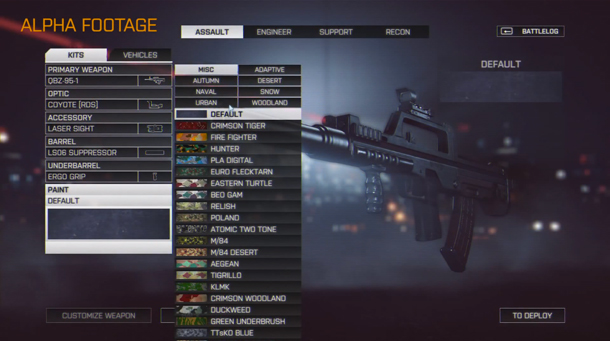 "Just look at all these options!"​
​
Weapon camouflage has been fine-tuned to add an even more personal touch to our new arsenal. DICE has added new camos such as Autumn, Desert, Naval, Snow, Urban and Woodland as well as an abundance of other new camouflages. These will come in 16 different types of patterns. However, no word as of how you will be able to unlock them, yet. In addition, "Adaptive Camouflage" will allow certain paints to fuse in with the environment you are currently located in.

If you love to sit back and pick off enemies one by one as the Recon class, you will now be able to calibrate the distance of where the enemy is. "When aiming at a remote enemy you can estimate the distance to your target. After you've figured out if your prey is 200, 500 or maybe even 1,000 meters away, you can calibrate your scope to compensate for the bullet drop that comes with long range shots. Zeroing your scope is an advanced technique and won’t make you perform perfect headshots every time, but for those skilled enough to approximate distance it will be a welcome strategic addition." I believe this is perfect add-on especially if you love and mastered the aspect of Battlefield 3 sniping.

You will now have the ability to pick-up weapons on a particular area of the map. "Battle Pickups" are designed to turn the tide of battle and also to give it a refreshing appeal to gameplay. The location around the pickups will become an area of interest; so if you fancy a .50 Cal sniper, don't let the enemy beat you to it!

​
​
​
"As with many other aspects of Battlefield 4, fan feedback has been crucial in making the weapon options better than ever. We've always strived for great weapon balance and numerous customization possibilities over the years, and now you can expect an even greater amount of depth. Listening to our fans, we've worked with everything from perfecting that sense of “oomph” in our guns, to bringing back some favorite weapons to Battlefield 4 – all of which have been completely rebalanced."​
​
Battlefield 4 is scheduled to be released October 29th on Xbox 360, PS3, and PC with the beta being available in early October. The version for next-gen consoles will drop in at some point in a later date.​
​
What are your thoughts on the bigger customization options? I for one can't wait to get deeper into this and forge a number of awesome weapons. Be sure to leave your opinions in the comments below.​
​
Want more information? Be sure to make your way to the Battlefield 4 section for upcoming news from me in the future.​
​
Source​
​