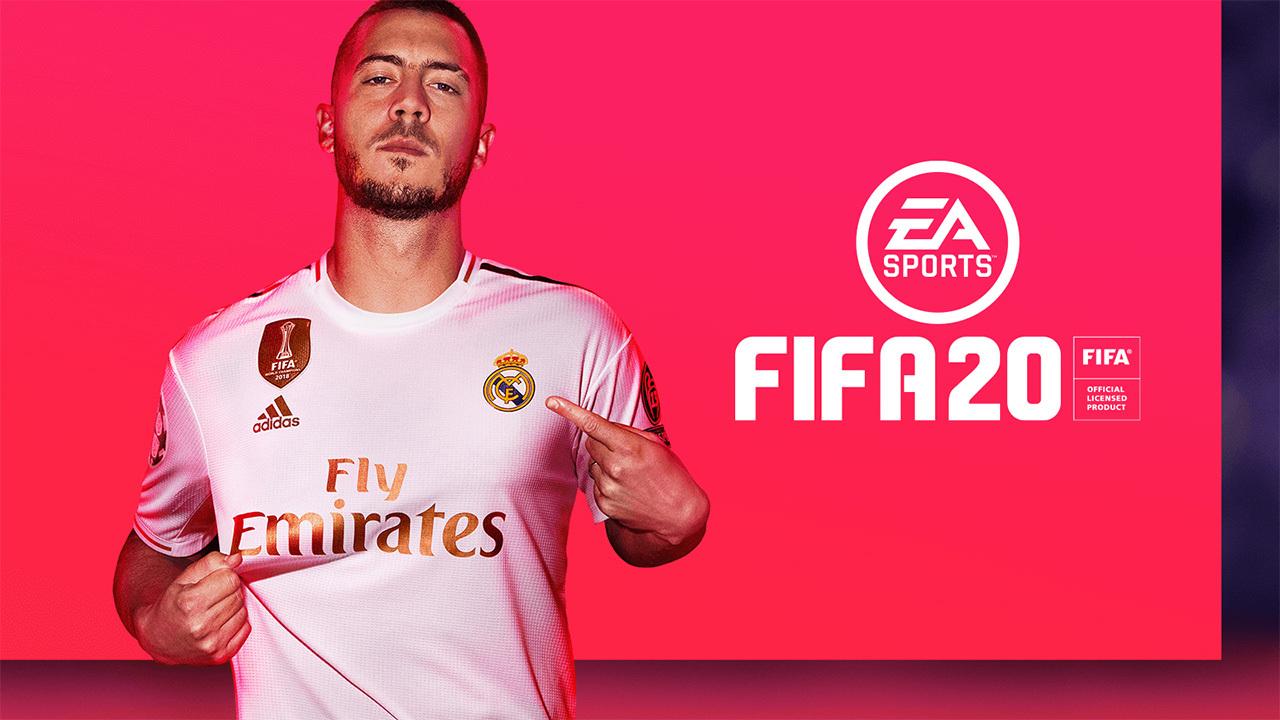 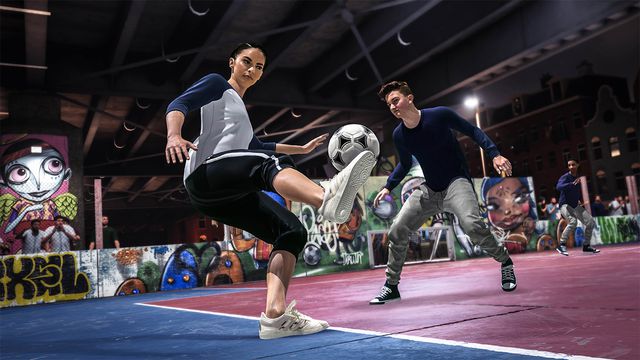 I groaned when I saw FIFA 20 had launched a new mode with yet another in-game currency, the third that can be spent in the game. So-called “Volta Coins” are for use in FIFA 20’s futsal/street soccer career only, and they only buy cosmetics, thank God. But on closer inspection, they pick up rewards that can help make modes under the pervasive influence — if not a necessity — of microtransactions a little more palatable.

FIFA 20’s Volta Soccer mode is offering its cosmetics on a timed basis, somewhat like the “battle pass” model people have gotten accustomed to in other non-sports live-service offerings. So players have two weeks to grab up a couple of kits, some shoes and a man-bun hairdo before the stock rotates.

We can get this stuff by completing either a set number of objectives or laying out the appropriate stack of Volta Coins — which are freely earned from the competition, as well as purchasable. But looking at their costs and unlock objectives, I can’t see how I wouldn’t get everything with two weeks of consistent, not even very skilled play. 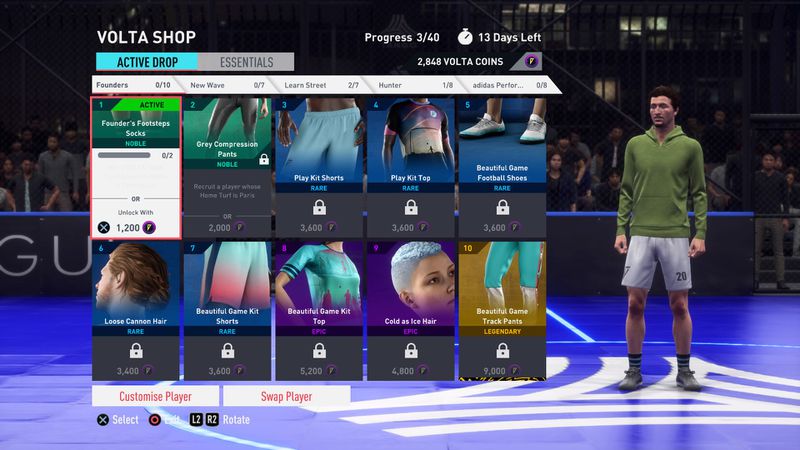 People don’t seem to mind this in Fortnite, I thought. Why the hell don’t they do this kind of thing with Ultimate Team?

Over in the Ultimate Team menu, I found out that I have 45 days to level up or fulfil a bunch of objectives so I can walk off with a 91-rated Eden Hazard, a kit that looks like lederhosen, a tifo and a stadium theme. This roughly fulfils the spread of weapon/character skin/weapon skin/badge that players are accustomed to in shooters that offer a battle pass of content. There’s a lot of grind in what FUT is offering, but even the most militant anti-microtransactionist will cop to enjoying actually playing Ultimate Team. That’s why everyone gets so upset: It’s a fun mode and concept weighed down by shopping trips and a ridiculous amount of time spent in menus. The only way to get this stuff is through gameplay. 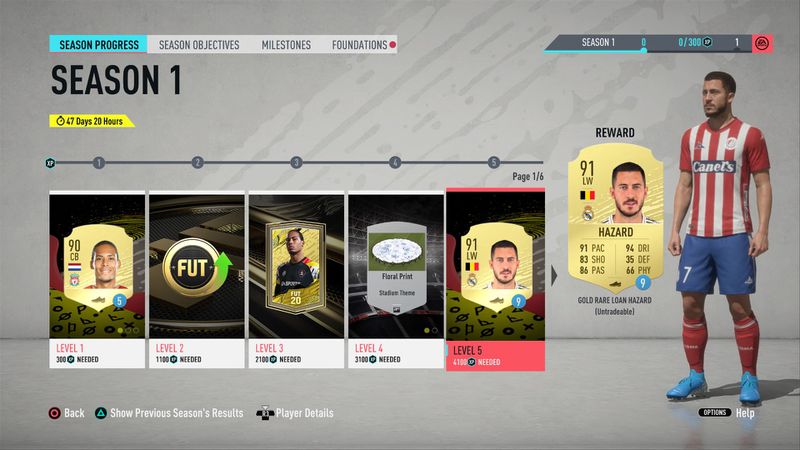 Polygon screenshot via EA Vancouver/Electronic Arts​
I’ve just sat down to Ultimate Team, that’s why I have no XP, but my first incentive is a 90-rated center back for basically free.

I’d overlooked this in my first, cursory trip through FUT because it’s over in a menu underneath the usual onboarding objectives, which are skippable. FUT and its Madden cousin have offered content prizes forever, including as rewards for completing tasks, they just haven’t done it on a term-limited basis, and rarely is it for a specific reward. Madden NFL 20 Ultimate Team this year will award you an 85-rated Baker Mayfield or Deacon Jones for completing a lengthy series of objectives, but these goals are not time-limited. Madden 20 does offer a team-of-the-week challenge that changes every seven days, but that awards a player at random, so it’s sort of a different beast.

Regardless, what FIFA 20 is doing, with its FUT seasonal goals and even the Volta Football cosmetics, is something I can support. I hope to see more of a battle-pass approach in sports titles that depend on these microtransaction modes to feed the bulldog. The defense of microtransactions in sports games, such that there is one, is often that they’re parked over in a separate and wholly avoidable mode if you don’t like them (although this is not at all the case for NBA 2K20). FUT’s seasonal swag is inside the mode itself and it can’t be bypassed with real cash (which is an important differentiator from the battle pass model elsewhere).

It’s also something that reminds old sods like me of the pre-DLC days when we had bona fide unlockables in sports video games, whether they were dug out by secret code or by completing in-game feats. When you talk to sports fans who are irate about the priority and deference gave to microtransacted modes, there’s a good shot they’ll angrily mention the virtual extinction of unlockables that have taken place since. People really do miss that, so anything that resembles unlockable free content would be good PR.


The more Ultimate Team or MyCareer makes it seem like actual cash layout is the only viable way to achieve something, the more pissed off people will be about it, and the more you’ll get black-market vendors of the currency publishers to insist has no value. That’s why FUT’s seasonal content and Volta Soccer’s rotating drops seem so profound to me if they sound ordinary to you. It’s because I’m used to specific items having a very high virtual currency cost, and I’m accustomed to in-game rewards being a loot box or a wad of currency as opposed to something specific.

You’re not going to put the MTX toothpaste back in the tube — not when NBA 2K19 was still one of the top 10 revenue performers not even a month before its successor’s launch. But it feels like it’s dawning on developers that they have to make their modes viable, fun and inclusive for people who don’t want to spend money, rather than put up a velvet rope and assume everything behind it is willing-buyer/willing-seller.