​
​
Well, it’s been quite some time since I’ve done one of these, hasn’t it? Today, we’re here to look at, in my opinion, one of the best games to ever be released, and a game that set a standard for many developers to follow. If you couldn’t read the title, I’m talking about Banjo Kazooie. So, you’re probably wondering what makes this game so special, right? Well, read on to find out.​
​
Banjo Kazooie actually began it’s development as an adventure game for the Super Nintendo called Project Dream. Project Dream was a very different game, featuring a human protagonist, with Banjo being a side character. However, Project Dream began to take to long to produce, so Rare decided to redevelop the game into what is now Banjo Kazooie, with Banjo as their new protagonist and Kazooie the bird as his sassy partner, and instead of an adventure game, we received a 3D collect-a-thon platformer à la Mario 64. However, instead of trying to emulate Mario 64, Banjo Kazooie took what Mario did as a basis, and created something entirely different, something fresh and new. We’ll talk about that later, though.​
​ 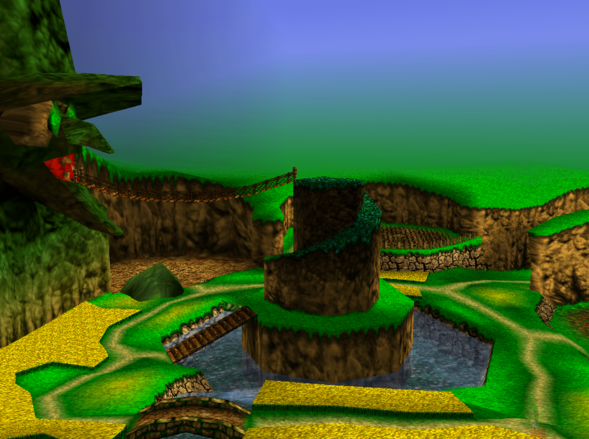 Spiral Mountain​
​
So, before I get into what made Banjo Kazooie such an iconic and memorable game, as far as level design goes at least, I’d like to talk about the plot. The game takes place in the peaceful land of Spiral mountain, starring (if you couldn’t guess) a bear named Banjo and a Red Winged Breegull named Kazooie who resides in Banjo’s backpack. One day, a nasty old witch named Gruntilda, who was using her magic cauldron as a sort of looking glass, discovers Banjo’s little sister Tootie, playing in the fields of Spiral Mountain. Furious that young Tootie is more beautiful than her, Gruntilda decides to kidnap, or bearnap, Tootie and steal her beauty. After hearing the commotion outside, Banjo and Kazooie go out and learn of what happened to Tootie. And so, Banjo and Kazooie set out to rescue poor Tootie from the evil Gruntilda. The thing about the story of Banjo Kazooie is that, on paper, it seems like a generic, uninspired “save the princess” kind of deal. What this story does right is how it delivers and presents itself. Instead of writing another "save the princess" story, Rare wrote a game with fantastic humor, and great dialog exchanges between characters. Through the writing, they make the characters memorable and unique, and something that doesn't take itself too seriously. Gruntilda only speaks in rhymes, Kazooie always has a smart-*** comment to make, Banjo is a tad on the slow side, and it’s these traits that make you look forward to the cut-scenes, which all things considered is an impressive feat.​
​

Traversing the high up platforms of Click Clock Wood​
​
Okay, we’ve discussed the plot, so let’s take a look at the level design, another point that really makes this game shine. After leaving Spiral Mountian, which really only serves as a training area, you’re introduced to the overworld you’ll be traversing in order to get to new worlds, called Gruntilda’s lair. In my opinion, the hub world is extremely well done, it’s kind of like the Conker’s Bad Fur Day overworld, if you’ve played that game. What makes it so great is how smoothly it transitions when you get close to the entrance of a new world. The scenery will change from a damp tunnel, to a graveyard, or to a Egypt style tomb. Not only does it look cool, but it’s a great way to figure out where in the world you are. Normally, I’d take a look at each individual level, but this time I’d like to take a look at the level design over all, and what Rare did right in this game. The first thing that Rare did right was making each level unique. If you’ve played Mario 64, you know that each world was fresh and new, generally offering fresh challenges to keep the game interesting, all while keeping a theme. Banjo Kazooie does this as well, and it does it near perfectly. As I mentioned before, this game is a collect-a-thon, and Rare did a good job of challenging you to collect everything. To begin with, the game doesn’t lay everything out for you. You need to find everything yourself, usually traversing increasingly difficult terrain to get the items you need, giving you a need to master the abilities Banjo and Kazooie have. Levels like Bubblegloop Swamp have you racing along narrow passages, punishing you if you fall in the harmful swamp water, while levels like Click Clock Wood rely on skilled jumping as you climb to the top of the level. It’s kind of hard to explain without playing it, but each level is a fun, and challenging experience.​
​
​

I hate these Snowmen​
​
While Banjo Kazooie excels at many things, it does have a few flaws. The main flaw is the camera control. While acceptable in the N64 era, it hasn’t really aged well, though I think this may have been fixed in the XBL Arcade port of the game. It’s also worth noting that collecting everything can feel tedious sometimes, but that’s just something that comes hand in hand with these types of games. The frustration of finding every little item in the game can be trying for most people.​
​
To wrap things up, if you haven’t played Banjo Kazooie, it’s time to pick this game up. Even after all these years, it still keeps its charm and wit, providing a good challenge for most all gamers. If you’re a fan of 3D platformers, and own an Xbox 360, pick up this title the next chance you get. P.S. I know this game has fantastic music, some of my favorite video game music of all time, but I didn’t include it because there wasn’t much to say.​


Images provided by Google
About author