Assassin's Creed 3 - What to expect

As a follow on from duff's article on the leaked images...

Ubisoft had previously confirmed that Ezio and Altair's story had been concluded in Assassin's Creed: Revelations, so it is strikingly apparent that the timeline has moved on. However it was also mentioned that Desmond's story hadn't quite run its course. This means that the character in the box art must be an ancestor of Desmond and will be playable via the Animus, although I'm sure that was no secret. The magazine Game Informer also revealed its new cover that gave us a more detailed picture of the character, in comparison to the leaked pictures yesterday.

The unnamed character bears Native American-styled clothing and weapons, like the tomahawk he wields in one hand, plus the bow and arrows slung over his shoulder. The character also has beaded armbands. The triangular hood, which was also worn by Altair and Ezio, has a crest of some sort which displays a bird, reminiscent of Native America. It could quite possibly be an eagle, as they are quite significant in the Assassin's Creed series. The Bald Eagle is also a symbol of America, so it would make sense that the bird crested on the hood is an eagle.

The box art image also gives the impression that the setting takes place during the Revolutionary War, judging by the dress-sense of the character the protagonist is slaying, and the figures in the background. Another giveaway is the flag. The flag is not the traditional American flag, but one with a circle of stars. 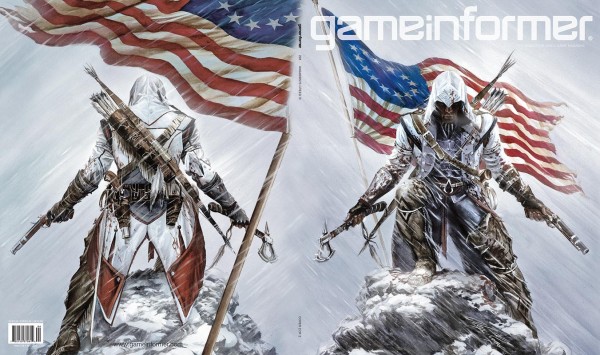 This was the American flag as of June 1777. This proves that the third instalment will take place during the Revolutionary War, most likely somewhere in the middle, in 1777 and 1778, a setting that many fans have been requesting for years. The back cover of the Game Informer magazine also shows a figure of a man on a horse.

The man is wearing a tricornered hat with cockades, and he has yellow and red stripes on his shoulder pads, which suggests he is a captain. It is believed that this could be George Washington himself, although it is difficult to tell from the picture. All images revealed boast a very Native American theme. The only concern is with the lack of buildings in the setting; will it take place in nearby forests, where the character can scale trees, or could it be set somewhere closer like Boston?

Assassin's Creed III will have its first trailer released on March 5th, so further details will be revealed then, and hopefully the enquiry of the setting of the game will be answered, or at least further hints given. The third instalment is due to hit shelves for Xbox 360, Playstation 3 and PC on October 30th, 2012.