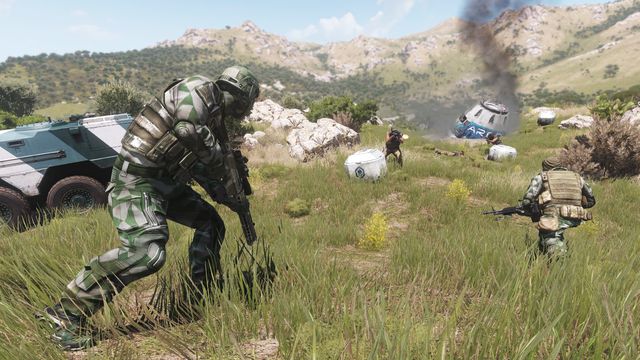 Bohemia Interactive, developers of survival shooter DayZ, have announced details of a new conversion for its popular military simulation game, Arma 3, called Argo. The free-to-play, standalone title will feature 5-on-5 multiplayer as well as 10-player cooperative missions on a new map.

The popularity of games like Arma 3 and DayZ have remained consistent over the past few years, despite the rise of competing products like H1Z1: King of the Kill and Playerunknown’s Battlegrounds. Arma 3 remains a staple of the top 20 most-played games on Steam, largely because of its modding community. Nevertheless, the onboarding experience for new players can be daunting. Argo seems to take the best parts of the Arma 3 — it's gunplay, ballistics and dynamic infantry stance systems — and package them together into a bite-sized package.

Multiplayer modes will include Link, Raid and Clash. The first two modes feature small maps, with objectives reminiscent of games like Counter-Strike. Clash is a slower, more tactical mode that allows players to chart a course through enemy territory with the ultimate objective of taking the enemy base.

All three competitive modes also feature airdrops. These packages will provide teams with differing benefits, ranging from extra respawns to a decrease in the game clock or even fresh reinforcements. The awards will depend on the game mode and the side claiming the drop.

The videos released today on the BI YouTube channel show players going at it with a wide range of kit, including body armor and suppressed light machineguns. Gear will be unlocked overtime, and can be purchased with experience points earned through fighting matches.

Also mentioned in today’s press release is a 10-player cooperative mode, which will allow a large squad to go up against Arma 3’s notoriously brutal AI. The setting for Argo will be an island called Malden, a 62 square kilometer sandbox which BI says is a recreation of the classic terrain from its very first game, Operation Flashpoint: Cold War Crisis.

There will be no microtransactions in the Argo, but BI says that fans can purchase a special bundle that includes exclusive animations, apparel and the ability to use vehicles in the game’s scenario editor. The game will be available on Steam and at the BI Store on June 22. Malden and the 10-player cooperative mode will be released simultaneously for Arma 3 and also be completely free.