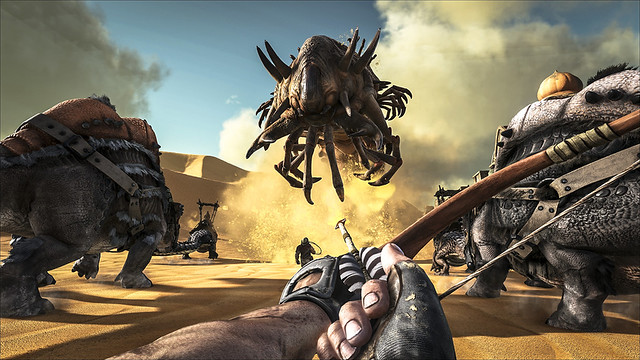 Everyone at Studio Wildcard is thrilled to announce that Ark: Survival Evolved is available today on PS4! Whether you dream of being an intrepid explorer, a peaceful Parasaur breeder, or a battle-hardened T-Rex-riding warrior, we think you’ll find something to engage you within the vast, primal worlds of Ark.

We’re particularly proud of the work that our partners at Abstraction Games have done with Ark on PS4, as the game looks beautiful and also gains substantial performance benefits from the PS4 Pro.

Ark’s going to receive a great many updates on PS4 between today and its ultimate “content complete” point next Spring, and beyond that we will continue to add many more creatures, items, and game mechanics. Please keep in mind that by joining Ark, you’re joining a work-in-progress game with a passionate community of players, and true to its namesake the game will continue to “Evolve” over its long lifetime.

In the weeks and months ahead you can expect some dramatic new additions to the Ark, including a complete redesign and expansion of the underground cave systems; a whole new Tek Tier of weapons, structures and items; an expanded menagerie of wondrous creatures; further increased game performance and optimization; per-pixel canvas painting; infinite customizable Procedurally Generated Arks; new systems such as hair customization and the “Ascension” end-game cycle; and limited-time holiday events & cosmetics.

One feature we’re particularly excited to bring to PS4 players early next year is the concept of player-run, PC-hosted dedicated servers for PS4 users to play on. These servers will have higher maximum player counts and lots of customizable settings, for hardcore server administrators to tune everything to their liking. We’re working on it, and it’s looking promising!

Something that I love about Ark is there are so many ways to play it. If you’re looking for hardcore, large-scale PvP, persistent online Survival warfare, Ark has plenty of servers geared specifically towards that play type. If you’re interested in more of a peaceful PvE constructive experience, there are servers and detailed game systems for that, too. If you just want to play in single-player or split-screen local multiplayer with your couched family, Ark has an option for that; or if you want to play a non-dedicated private session with just your close PSN Friends, Ark’s got you covered. Or if you shun all modern technology and just want to “live-off-the-land” with primitive tools, Ark has several game modes oriented towards that as well. Even though we’re a relatively small team at Wildcard, we’ve tried to provide “something for everyone” in Ark, because we know that every gamer has their own preferences.

Finally, I should mention: please be nice and courteous to your fellow Survivors! Unless, of course, you intend to knock them out, shackle them in a cage, and play loud Britney Spears music over voice chat until your captive eats poop to sicken themselves to death. For that venerable endeavor, you have our full permission. In all seriousness though, remember, we’re all in this together: the worlds of Ark can be harsh and unforgiving, so you often have more to gain by cooperating than by competing!

We really appreciate everyone’s support in helping to grow the Ark universe, and we are looking forward to seeing and hearing about the amazing Dino-sized stories, challenges, and adventures that PS4 players will now get to experience.

Welcome to the Ark, PS4 Survivors!