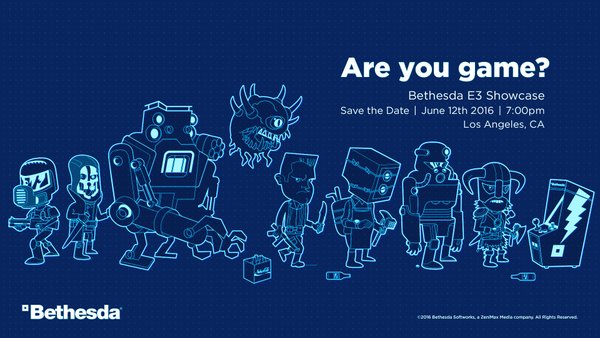 All the way back in 2015, Bethesda took to the spotlight at E3 and put on a show that both excited and enthralled the avid fans that joined them. With them showing off a wide range of things, from the revival of an old classic in Doom, to a brand new free to play MOBA/Shooter in Battlecry, they certainly provided a wonderful bundle of joy for anyone with an interest in video games. But now, a year later, they're coming back with what seems to be even more amazing announcements and information.


​
On the 1st of Feb, Bethesda tweeted out a little reminder for us to "Save the date" to watch them step into the limelight once again. The graphic that they tweeted out is hopefully a little preview of what's in store for us with there being characters from Doom, Skyrim, Fallout, and Wolfenstein (alongside a few other characters that I'm not too sure about).

Due to the number of different proverbial pies Bethesda have their thumbs in, there is a chance that this year's E3 is going to be a huge success just like Bethesda's E3 showcase last year. Hopefully there will be a few updates on content for the games mentioned last year and maybe even a few new IP's to spark a few new flames into the gaming world.