Are 3D Phones The Next Big Thing? 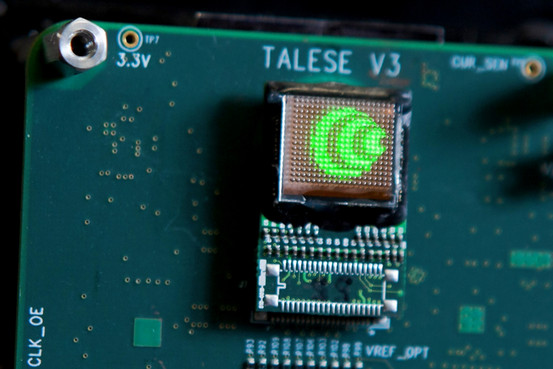 Mobile phones are always evolving; whether it be fingerprint scanning or curved screens, there are always crazy new technologies being brought to mobile devices. This time around the newest innovation we may see in the future is 3D displays. I’m not talking about those gimmicky “3D” displays with one viewing angle or a phone that needs you to wear glasses, this time it’s the real deal. Thanks to Ostendo Technologies, a well funded startup located in California, holograms like we see in Star Wars will become more than science fiction, and could even appear on smartphones.

The concept of holograms is nothing new considering we have seen it various fictional movies and media. There have also been real world appearances of hologram technology, but it has always been handicapped by many factors such as size, viewing angles, and practicality. Luckily, Ostendo has been working on a line of projectors that can provide 3D holograms with significantly less drawbacks. Ostendo’s projectors are powered by a tiny processor that can intelligently control the light emitted to give an optimal viewing angle to the viewer. Remarkably, one of their projectors is just the size of a tic tac, but it can still produce an image that measures 48 inches diagonally. While this may seem to good to be true at first, it is an exciting reality.

Wall Street Journal was fortunate enough to see a live demo of their latest projector. After seeing a hologram of two dice spinning in mid air, WSJ said “the image and motion appeared consistent, irrespective of the position of the viewer.” In addition to the impressive viewing angles and consistency, another feature this tiny project has going for it is the pixel density. According Ramesh Raskar, an associate professor at MIT, the projector is able to provide viewers with a density of 5000ppi, which is 16,666% higher than the density of Apple’s current retina displays. This technology has been proven to work in test situations, but unfortunately it is still quite not ready for consumers.

If everything goes according to plan, Ostendo will have a 2D version of their projector out by the summer of 2015. Then by the second half of 2015 they will start to manufacture 3D projectors with an estimated price-tag of only $30 per unit. As of now, Ostendo does not know exactly where this technology will end up, but they hope for it to reach mobile devices, and maybe even larger devices. Since the projector would be about the size of an iPhone camera, it is not hard to imagine the projector being implemented on various mobile devices such as phones, tablets, and maybe even smart watches. While Ostendo may be the most recent company to announce such a great technology, there are also some other companies that have been working on 3D displays.

Last october, HP told the world they were working on bringing holograms to the mobile scene via a new project named Leia. Leia uses light diffractions to give the projected image 64 unique points of view while using minimal CPU power. Unfortunately, Leia did have it’s fair share of flaws such as poor resolution and lack of color, which could be the reason why we have not heard anything about it since October. On the bright side, there may be exciting news regarding 3D phones just around the corner.

On June 4th, Amazon announced they will be unveiling an “amazing” device on the 18th, and it is very likely this device be a 3D smartphone. In the past, there have numerous reports that Amazon has been working on various smartphones and that one of these smartphones will have a 3D display. Unfortunately, not much info has been given on the display itself. The only information we have gotten is that it will use eye tracking technology to make the display follow the user’s eyes. In addition to these reports, Amazon has posted a video that shows customers using this “amazing” device. The people in the commercial make comments such as “it moved with me” as they were moving their heads, suggesting they were using a mobile device with a 3D display. While all of this information regarding Amazon is just speculation, it is highly plausible their new device will be a 3D smartphone due to all the aforementioned evidence. Regardless of whether Amazon will be unveiling their own 3D smartphone, it is definite that we will start seeing hologram technology in the near future.