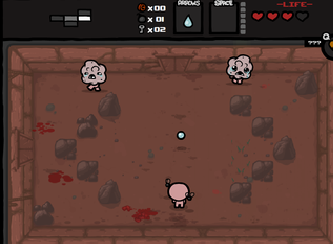 ​
In a move that has quickly proven itself to be controversial, Apple has denied the addition of The Binding of Isaac: Rebirth to the App Store, citing depictions of child abuse as their reasoning. The mobile giant's censorship of this game has caused quite a stir among the gaming community, and some are calling Apple out on having a "double standard" against meaningful gameplay while choosing to promote artistic freedom in other forms of media. While a surface-level look at this decision can easily paint Apple as a group of clueless, out-of-touch suits, does it really warrant such definitive accusations?

As iOS is a closed operating system, it is very difficult to download banned titles from a third party, meaning that whatever appears on the App Store is whatever the average Apple consumer is ever going to see. Since Apple has such a massive influence in the mobile gaming market, many people think this is a problem. Because Apple has so much control over the mobile gaming market, developers who want to make meaningful games will be censored and rejected. While a glance at that statement may seem startling, it really shouldn't be. iOS simply has a stricter groundwork than, for example, an Android operating system. Not allowing third party application downloads is a mere safety measure, and claiming that it is put in place to prevent artistic expression through gaming is a little dramatic. If The Binding of Isaac: Rebirth was rejected from the Play Store, Google would not see a fraction of the backlash Apple currently is, as the application would simply be uploaded to a third party source.

Another accusation Apple is currently facing is that they are encouraging games that cater towards children, mostly employing easy-to-learn puzzle games to achieve this end. While this is undeniably true, this statement holds true for the mobile gaming market in general, not just what Apple is approving. This kind of market over-saturation shouldn't come as a surprise, as mobile gaming isn't a market where meaningful gameplay matters. Mobile games are time wasters; colorful chunks of entertainment used to fill voids of time. Mobile gaming is, perhaps, the only platform where a truly meaningless game is acceptable. The bar for gaming in this market has been dropped so low that the expectations have become nonexistent. How many Bejeweled clones are we going to see before somebody catches on; and while it could be argued that a dark horse like The Binding of Isaac could step in and blast those expectations out of the water, this would just not be the case. The Binding of Isaac would simply be reduced to what entertained you while waiting for your dentist to be ready to see you. That feels like more of a tragedy than the game being rejected from the App Store.

Apple is not anti-gaming. Apple simply knows its market very well and knows how to mine every byte of it for the maximum dollar. This is an incredibly slimy way to go about business, but it doesn't make the corporation against gaming. In rejecting Isaac from the App Store, Apple was merely catering to its largest audience. Sacrificing artistic integrity to please as many people as possible is absolutely nothing new, and all forms of media are guilty of this. While Apple may let Chris Brown's abusive nature slide by prominently featuring him on iTunes, this is only because a lot of people know of and like his music. Apple is not promoting his abuse, nor are they putting music above gaming. Chris Brown is a tool for Apple to make more money. This standard works both ways. No matter how much profundity you think it has, A Serbian Film will never, ever find its way onto iTunes, for the same reasons The Binding of Isaac failed to find a place on the App Store.