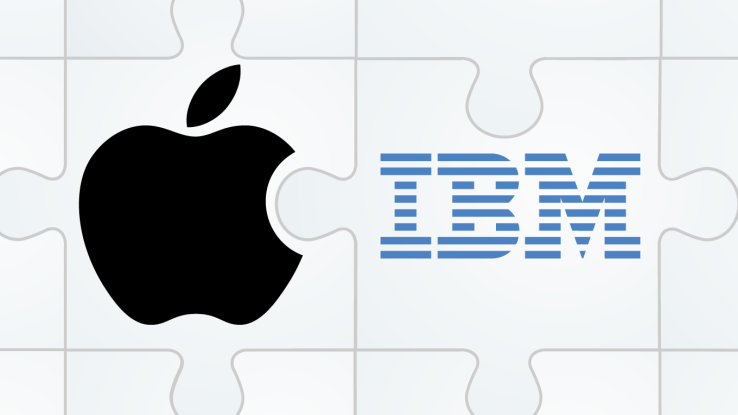 IBM, one of the worlds largest technology companies revenue wise, recently struck a deal with Apple on Tuesday. The deal stated that IBM would make a "line of enterprise-specific apps from the ground up for Apple’s iOS, aimed at companies in retail, health care, transportation and other industries." Not only that, but they will also be "creating unique cloud services", as well as making tools for security and device management. To top it all off, IBM will be reselling iPhones and iPads to its staff. Where does Apple come into this, you may ask? They will be making support services not just for IBM, but for other companies as well. Each plays their own part in the deal, and together they will make a very large impact on the mobile business market, which could sink or float some of Apple's major competitors.

The deal overall was set to one specific goal; bring IBM's data and analystic abilities to what IBM refers to as the "devices of the world", the iPhone and iPad. Both Apple products are used by many workers in this day in age, including businesspeople. However, Apple feels as if it has been a "renegade" in the corporate world, and wants to change that as soon as possible. That's where IBM steps in. “If IBM can come in and say, ‘We'll make sure this Apple stuff works well with the other stuff you’ve got already,’ it will make the IT guy feel a lot better." Now, obviously every company wants to please its consumers in some way or another, and Apple feels as this is the step in the right direction to do just that.

Apple and IBM have been "partners" for quite some time now, but Apple has pretty much just shoved them off to the side and continued about their day. But, this deal now gives IBM access to "all of Apple's API's (application programing interfaces) and tools" just like other vendors have had in the past. Along with access to tools and API's, this deal may also give IBM the privilege to play around with some of Apple's other features, such as "Find my Phone and other remote capabilities" and add in some of their own management tools. All of this access pretty much gives IBM the opportunity to become creative, as well as work with Apple to develop very helpful tools for many people.

Every deal made by major companies are bound to leave some people upset, however. Jack Gold, President of J.Gold Associates, noted that IBM has made a deal like this in the past, except with Blackberry and the once Palm Inc. He also went on to say that he wasn't surprised by the deal between IBM and Apple, as this allows IBM to "expand its client base among customers who need more support for iOS." Others say that the deal will "carry weight", but it's nearly impossible to tell how much. Not only that, but they even went as far as saying that this maybe the end for Blackberry altogether. With Apple being able to handle sales and support with a major company like IBM, it's going to be very challenging for Blackberry to keep up.

So, what are your thoughts on this? Will Apple sink or float with the new deal? And will Blackberry be able to keep up with the sudden change?