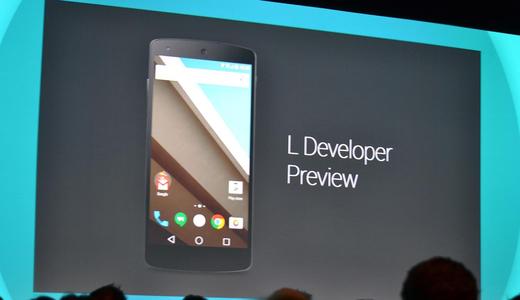 This past Wednesday, Google held their annual developer conference, Google I/O. Much like Apple’s WWDC, I/O is when Google shows off all their upcoming technology to developers and the world to get everyone prepared for the next era of Google. There were many exciting things at I/O this year, but one of the main focuses was Google’s next mobile OS, Android L. Android L brings more than five thousand new APIs to developers and give a whole new look to Android in order to create a unique mobile experience.

One of the main focuses of L is the new look, which they call ‘material’. Material is a brand new style that combines flat elements with fluid animations creating one seamless experience. With material, pixels on the screen have more than just height and width, they also have depth. Developers can now specify a depth attribute to any element and it will be given realistic shadows and light sources. This can create the illusion of some elements floating or hovering above others and looks very appealing. The static look of material is rather intriguing, but material has more to it than just still elements.

Material adds new animations and transitions that make the android experience more lively and fluid. Every element on the screen responds to touch in it’s own way. This means whenever you click on an element, it responds by changing colors, moving, rippling, or whatever other animation comes to mind. Material also has a feature called nested scrolling which gives all elements a hierarchy when the user is scrolling. This causes different elements to react in different ways when the user is scrolls, so some element might get smaller as you scroll, some may disappear, and some may stay right where they are. In addition to scrolling, Google also wants elements to have fast and fluid transition when switching between apps and different UIs. Google delivers a variation of transitions all at sixty frames per second, making your android experience “Fast, fluid, and continuous.” While the material design is very exciting, Android L has a lot more to offer than just pretty looks.

On top of looking good, Android L also performs extremely well. L utilizes the ART runtime as the primary runtime to make the android experience much more faster. With ART, apps will be able to launch and perform much faster. ART is also cross-platform so it supports X86, ARM, and MIPS architectures while a;sp fully capable of running 64-bit. In addition to CPU performance, L also will allow much better GPU performance. L features the Android extension pack which brings many advanced graphical features to the android experience. At the keynote, Google showed off L running a demo on Epic’s Unreal Engine 4, and it looked rather stellar with high quality lighting, shadowing, and rendering. Android L has a lot to offer when it comes to performance, and luckily the performance won’t be taking a huge toll on the battery life.

In order to increase battery life, Google is starting a new project named project volta. Volta approaches battery issues via many different angles. One of the ways google is tackling the battery dilemma is by letting the user see exactly what is using up their battery. With a new app called Battery Historian, users can check what is happening when their battery is going down. They can then use this information to turn off or configure certain applications when needed to save battery life. Google is also including a new API for developers, named JobScheduler, that allows them to prioritize tasks in their apps so the app can respond to different battery states in different ways. This means that when the battery is low, the app may automatically reduce the amount of tasks it is performing to save battery. Finally, Google also added a system-wide setting called battery saver which changes various things such as refresh rates, CPU clock, and background data to save as much as ninety minutes on your phone’s battery life. Greater performance with better battery life allows Android L to do some exciting things, and at I/O Google showed off a lot of new exciting features.

To accompany the new looks and performance tweaks, L also has a lot of new features. One of the biggest features Google was pushing during I/O was the fact that L is ‘contextually aware’. This means that your devices can use data from various sensors to detect where it is, and it will act differently in different places. One example of this is the new personal locking. With personal locking, you don’t always need to enter in a pattern or pin to unlock your phone. Your phone can detect where it is or who it is with, and applies a locking mechanism appropriately. For example, if you have a smart watch and pick up your phone, your phone will recognize your watch and not have you enter a PIN because it knows it is you. Google is also aiming to create a system that separates your work and personal data on your device depending on where you are. Now you can use one device for both personal and business reasons and not have the data conflict with each other. In addition to contextual awareness being added, Google also greatly enhanced the notification system. Much like being contextually aware, your phone is also aware of who you are and what you like. This allows your device to prioritize notifications and show what is most important to you first. You can now also view notifications on the lock screen and directly act on them from there. This means you can launch an app right from the lock screen. In addition to lock screen notifications, Google is also adding new ‘heads up’ notifications.These notifications appear at the top of your device even while in an app. From a heads up notifications you can directly interact with the notification without pausing the app. This allows you to do things such as accept or deny calls without having to leave the app. Android L has a lot of new features both under the hood and in plain sight, and all of them are rather exciting.

Android L is a fairly large step from previous versions of Android. The new look, performance, and features makes Android seem like a whole new experience. Fortunately, some of us won’t have to wait long to experience L. The Android L developer preview will be making it’s way Nexus 5 and Nexus 7 today, and I’m sure there will be unofficial ways to get it on other devices. HTC also promised that L will be coming to their HTC One M7 and M8 within 90 days of receiving the source code from Google, but there is no confirmed time. It’s also safe to assume other mainstream devices from companies like LG and Samsung will also eventually be getting the update but there has been no confirmed announcements or timelines. Regardless of the timing, Android L is very exciting and Google will once again change how we interact with our devices.