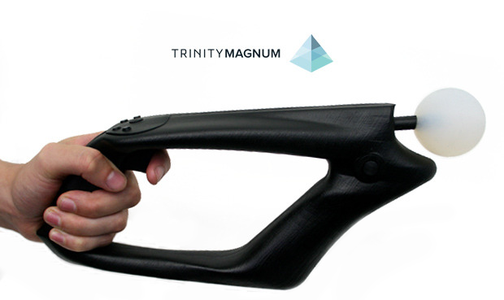 Virtual reality alone has made waves in the media due to the immersive experience the Oculus Rift can deliver. The Rift alone, however, does not satisfy every gamers needs. One of the biggest drawbacks of virtual reality is the lack of VR-optimized controllers. When using a VR headset, most people have to use a keyboard or controller which can take away from the immersion. A relatively new company, TrinityVR, has been working a project that aims to eliminate this issue with their new gun-shaped controller, the Magnum.

The Magnum has a lot of unique features that could bring immersion to a completely new level, especially in FPSs. For motion tracking, the controller combines inertial tracking with optical tracking to provide 1:1 low-latency accuracy. It is expected to work with the Oculus camera, PSEye, kinect, and most webcams. As expected, the experience won’t be as good on webcams, but as long as the camera supports OpenCV it should work to some extent.

While the technical specifications are very important, the main attraction of the Magnum is the form factor. The Magnum has a lightweight gun-shaped shell which resembles the Wii zapper. This allows the controller to be used in two ways, with one hand or two hands. If you hold the controller with two hands, it can be used to “shoot enemies in a FPS, hold a hose as a fire fighter, pilot a spaceship or do precise decorations on a cake.” If held with two hands, the controller turns into “a medieval sword, a tennis racket or a magic wand.” The controller also has one trigger, two analog joysticks, and four tactile buttons. While the buttons are an important feature, TrinityVR is working on a format so that they do not take away from the immersion. The form factor combined with the advanced technology inside come together to bring a versatile experience to future VR games.

The Magnum has been a self-funded project in the past, but TrinityVR recently turned to kickstarter to fund the rest of the project. TrinityVR hopes to raise $60,000 to make the Magnum an innovate, yet inexpensive, controller. Right now, you can fund the kickstarter for $100 and receive the dev kit by December 2014. TinityVR also stated they hope the final version to retail under $100, but no exact price or date has been given for the retail version. Either way, the Magnum is a controller that we can definitely look forward to as VR progresses.