Absolver: Slocap and Ubisoft Team Up to Create a Martial Arts Based MMO 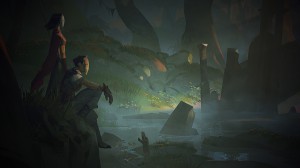 After flying under the radar for over a year, Indie developer Slocap has finally come out of the shadows to finally share details on their upcoming PlayStation 4 exclusive that was a collaborative effort between Slocap and Ubisoft. Titled Absolver, the inspiration to create the game spawned from the desire to create and online action game that combined a fantasy world with martial arts. Slocap wanted to create a beautiful open-world environment where players all around the world could tell their own story as they travel the world. In Absolver you can team up with other players or slaughter everyone you come across, trade items and teach other players new moves. The world is yours for the taking, you just have to be willing to take it.

The story of Absolver begins with the player waking up in the desolate ruins of a collapsed empire. With only faint memories of your life, a memory that took place during your own ceremony of vows leads you to join an elite corp of highly-skilled martial artists called Absolvers. Fighting to help maintain order and peace in the world, the Absolvers are the acting law in a lawless land. The journey to become an Absolver will be long and hard, but perseverance is the key to victory. The developers believe the lone wolf will always be the first to fall, while the players who remain in a pack, always supporting one another will always outshine the rest.

The game will feature many trials, most taking place in ritual combat arenas where players are ranked in multiple duels and challenges that are based on teamwork. Reiterating the essence of teamwork, the developers are adamant that one of the trials, the Essence mines of Adal, will mean certain death for any player who dares to venture into that territory on their own. It’s considered to be a place where only those who have true skill will survive.

The gameplay of Absolver is based upon the four different stances that will be available for players to choose from. Based upon the player’s orientation towards their opponent, Slocap created the style with the intention to have gamers engage in epic battles with “endless fluid combos.” As players explore the world of Absolver they can enroll in different martial arts schools to learn new styles and moves. After players pick their desired combat style and weapon, they can use the in-game Combat Deck to craft their very own unique fighting style. As players fight, special moves they have learned can be used once their Tension shards, an in-game meter that fills as a fight progresses, caps out. Slocap wants the combat of Absolver to be as intense and smooth as it can possibly be. They’ve been testing the game non-stop and will be opening a beta very soon. Stay tuned for E3 to get a deeper look at Absolver, including previews and gameplay!