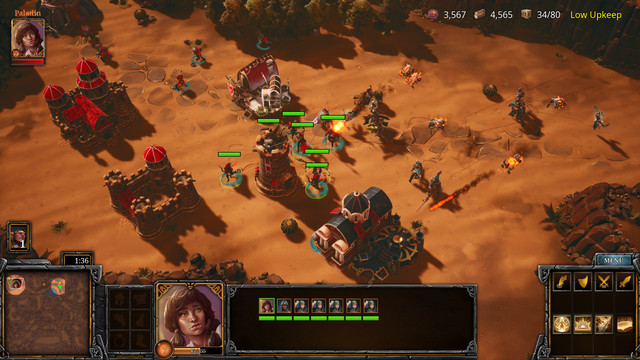 A Year of Rain from Daedalic is a game for those of us with fond memories playing real-time strategy classics like Warcraft 3. It’s an unapologetically faithful recreation of a style of RTS that’s coming back into fashion, with Blizzard’s own Warcraft 3: Reforged due out later this year.

Designed to be played in two-vs-two mode (though single-players can utilize AI partners), the game has a 15-hour campaign, as well as various multiplayer modes. It’s basically a four-corner map, in which two teams of two allies construct buildings, churn out units, collect resources, upgrade soldiers and set off for battle.

Three different factions are available. One is standard fantasy fare, the second is undead zombies, while the third is a collection of mythological misfits. Within each faction, I can choose one of three heroes, depending on the kind of powers I want to focus on. One is a tank, another a healer, while a third is more like a mage. Each faction has its own variety of heroes, who spawn automatically near the beginning of each game.

Finally, I can choose a class that best complements my player-partner’s chosen approach. These create buffs that best suit my style of play, or counterbalance the hero I’ve chosen, offering different ways to defeat my enemies.

In a nod to modern MOBAs, Non-Player Characters also inhabit the map, which I try to defeat in order to gain combat boosts.

I played the game for about 20 minutes today and quickly found myself sliding into my happy Warcraft 3 groove. But for those who are new to RTS games, on-screen prompts show ideal progression routes, before leaving the player to take care of their own battles.

A Year of Rain is due out in the last three months of this year, for Linux, Mac, and Windows PC.