A Dissertation Regarding the Philosophy Behind Gaming 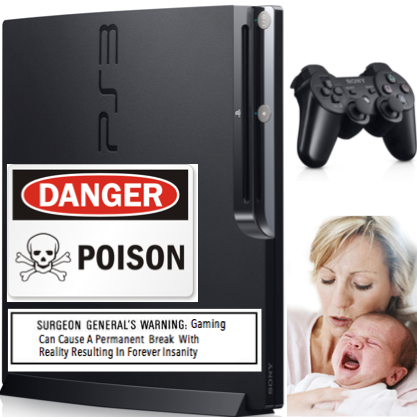 Gaming has been a staple of modern culture for several decades now. Ever since its genesis, gaming has become a necessary part of human life, to a near-superfluous degree. Bridging several generations, this is a facet of culture that is sure to never die out. But why did gaming become such an important part of life? Why was it created in the first place? Did gaming actually start out with the creation of Pong, or was it something from a much longer time ago? Within this article, I will try to examine the philosophy behind what gaming is and why it has become such a vital part of our lives.

Gaming is, by definition, a mere medium through which people pass the time. Gaming isn't a necessity, per se, but it is certainly a part of life that some people simply can't live without. People become addicted to games and spend crushing hours, days, weeks trying to achieve virtual objectives. This has definitely caught my attention, as well as my confusion. Why do people work so hard to achieve these otherwise pointless ends? Well, perhaps its a shortcoming that stems from the human psyche itself. You see, the human mind strives for validation, and it is willing to do whatever it takes to achieve this validation. Whether it is validation from other people, other animals, or any other medium in its entirety, the human mind will work towards the objective of gaining approval. It is a simple flaw of the human mind to not work towards self-improvement because it is too busy trying to improve in the eyes of others. Gaming preys upon this and turns this flaw against you to its highest degree. Gaming is merely a medium for one to gain validation. A clear objective is set, and it dares the player to give in to this ruse and desperately search for that almost instinctual yearning for validation. By playing games, you are giving in to your own insecurities. Whether you're trying to beat the story of a game, dominate in a multiplayer mode, or complete some side quests, you're only doing this so that your mind feels at-peace. Gaming is not necessarily an element of entertainment; while it certainly is entertaining to subconsciously abuse yourself like this, are you really playing to pass the time?

To extend this point further, think of yourself trying to complete a difficult portion of a game, or trying to win a game of Call of Duty against people who are clearly better than you. Since the odds are so stacked against you, you're bound to lose a lot, or die a lot, and you will inevitably become frustrated. This anger will build up to a head and, if you let it, it will explode in some fashion, whether it be through throwing your controller across the room, shouting racial slurs at your opponents (whether AI or living), or angrily yelling at your mom for bringing you pepperoni Hot Pockets when you clearly asked for cheese, this eroding of your psyche will manifest itself eventually if you play for long enough. This psychological phenomenon has been ravaging gamers for years now, especially with the birthing of online multiplayer games. Gaming is not about having fun, and to be blunt, it never really has been. Gaming is always about crushing your opponents and giving your mind a generous self-esteem boost in the bargain. If you think you're playing games in a mindless exercise, play a difficult segment and watch yourself get angry over it. Playing a game for fun is simply a case of you deluding yourself, so you don't have to accept the harsh reality that you will never think you're good enough, and so you have to prove yourself wrong by completing every objective that you're faced with. It's simply human nature.

Gaming is also a coping mechanism. Enduring the crushing redundancy of life tends to become rather depressing at times, and so there needs to be something thrown into the mix to break the cycle. Introducing the mind to false worlds and investing it into virtual characters is a great way of tricking it into thinking that your life is interesting and worth something. It can become therapeutic and distract you from the demoralizing banality of life. Your mind will internalize these new variables that have been thrown in, and it will consequently delude you into thinking life is more exciting than it really is. Throwing your mind into thinking it is Captain Price in a juggernaut suit is a lot more alluring than the reality of the nihilistic nature of life that only leads to the sweet infinity of death that will unconditionally take you.

Have you noticed that when you're by yourself, your mind tends to wander? If you're bored sitting in class while the teacher is telling you meaningful things and you willingly ignore them, do you have the tendency to pop out your laptop or mobile device and play some Bejeweled ripoff? If you replied with a "yes," that means that your mind is subject to self-deprecating thoughts and gaming is the therapy of choice for it. When a person is by themselves, it's easy for the mind to focus on the only living subject in the room, and since it has a natural tendency to dominate all opponents, it turns on itself. This phenomenon is what is known as "self-loathing," where a person begins to say degrading things about themselves and slowly begins to realise these phrases as truth. Eventually, the person starts to hate themselves, which will ultimately lead to a plethora of psychological problems. Your brain has one thing as its objective: self-preservation. If you're by yourself, your brain will tell you that you need a distraction immediately, lest you start thinking about yourself hopping off of the Golden Gate Bridge on a cloudy Thursday afternoon in a positive fashion. In order to preserve your innocence (and perhaps your ignorance, because after all, we have no free will) the mind will simply write this off as boredom, and will turn your mind towards fixing the situation at hand. If you're sitting in class and your mind starts to wander, this is simply your body's way of telling you that school is not for you and you should spend the rest of your cyclic life playing games until your body withers away. Dust to dust, my friends.

The greedy corporate machine has found out this secret long before you, and I'm simply the messenger here. Games that are filled with impossible objectives with pay-to-win schemes are all a byproduct of the Suits of Avarice getting together and finding out new ways to exploit your psyche. Since the mind is nothing but a series of nerves and signals used to control your body, you don't actually expect yourself to be in control, right? Have you ever played a game and you found one achievement you so desperately wanted to have, and you grinded for it? You grinded for that virtual achievement more than anything you've ever grinded for before, and you still didn't get it. "Well, that's just a darn-tootin' shame!" you inevitably tell yourself, probably with a gullible, dumb smile on your face. Well, that initial naively positive look towards this mindset eventually devolves into something much more sinister. You keep trying and trying, the hours of your day wasting, your stomach growling at you for sustenance, your mind decaying at the lack of sleep, yet you keep playing, pouring your time and money into the corporate machine, and continue to have nothing to show for it! The Capitalist regime wants you to die, fellow gamer! It wants you to die a slow, painful, Dorito-deprived death, and if you feed into your "boredom," this is exactly what's going to happen. I have provided a handy graph to support this reasoning that is definitely properly sourced. 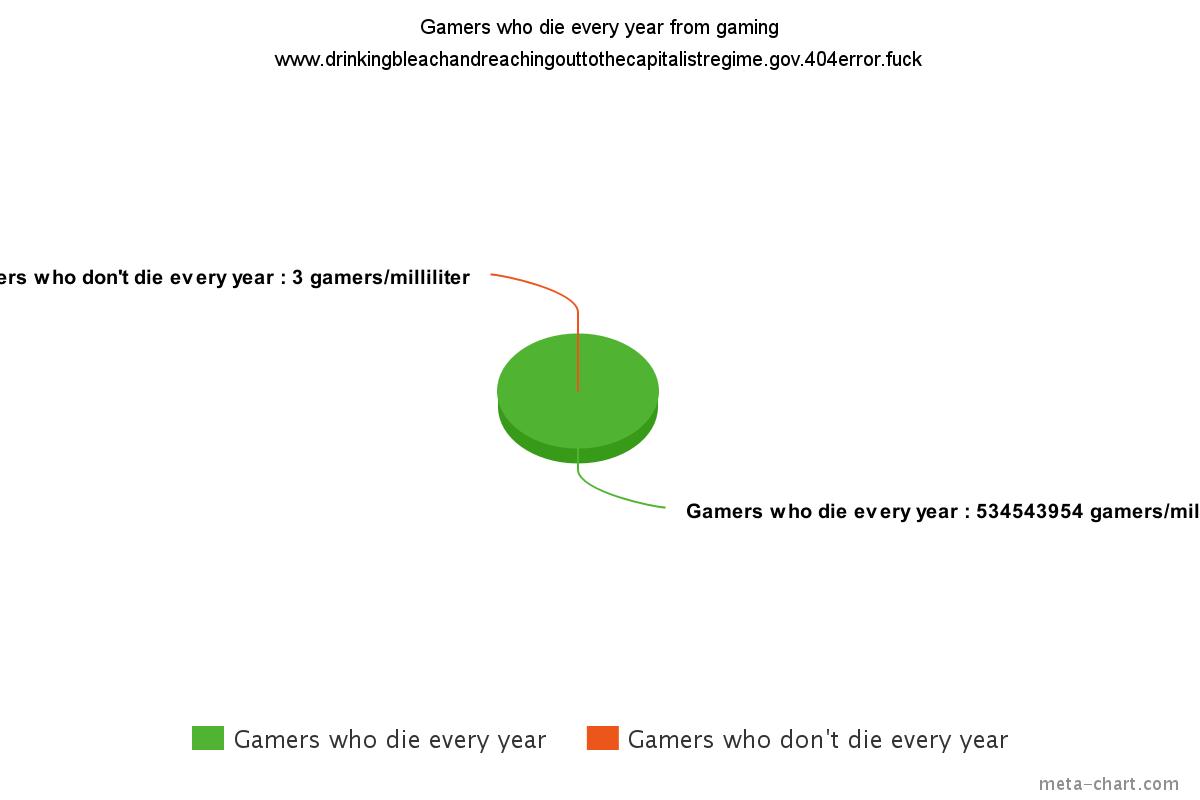 Can't you see what Capitalism has done to our culture? Do you see how many gamers died last year from lack of nutrition? That's a number I can't even count to, probably because it's total crap. But hark at the horrors of the greedy gaming companies like Fancy Feast and Ralph Lauren! Feast your eyes on the exposure of these greedy suits, and turn your backs on them! Your lives are all worthless, and these companies are capitalizing on your crippling lack of excitement! Grand Theft Auto has been trying to replicate real life for years, and soon they will make this achievement. With the creation of VR and its soon-to-be widespread appeal, there will be no more real life left. The line between reality and virtual reality will soon be blurred, and everyone will want a piece of that sweet, sweet Los Santos lifestyle. Gamers will be shelling out millions, billions, trillions to game developers, and will be forfeiting their hard-earned dollars in the process. It will be the end of Man. The end of time. The end of the world. And who will be to blame?
The answer is you. You are to blame.
About author