3DNES Brings Your Nostalgia to the Third Dimension 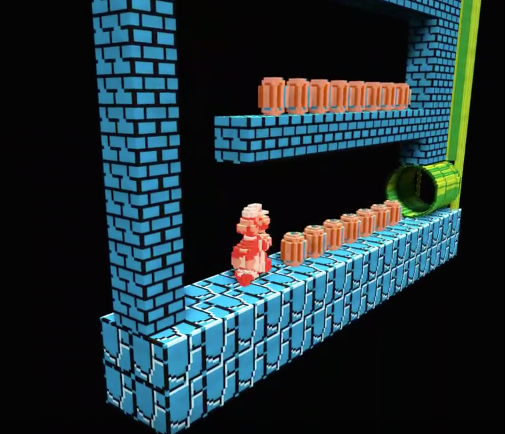 ​
Sprites, pixel art, and 2D games are a thing of the past, much like landlines, newspapers, and chivalry. In this age of hyper-realism, games of simple design are few and far in between, and they are primarily used as gimmicks. With good reason, too; the games of old just look foolish in comparison to the titans of today. Go ahead, fire up your NES and relish how archaic it all looks. Sure, at the time it pushed the limits of the gaming market, but now it just looks silly. That, however, is where Geod Studio comes in with the 3DNES to make your obsolete graphics look fashionable again. Your nostalgia lives another day free from the cold, dead hands of impending reality.

3DNES is an NES emulator that converts all of your favourite titles into 3D, as the name implies. The emulator uses an algorithm to add depth to sprites and background images, and it does a little more than simply stretch the sprites onto another axis, as circles are converted into spheres. It appears to separate images from the background renders, which looks relatively clunky with the NES-style graphics. Although this functions well enough for more simply-designed games, such as Super Mario Bros., more complex games don't fare as well. Since anyone can use the emulator if they have a ROM ready to go and Firefox (yes, the emulator only works on Firefox), I decided to try this for a spin.

Since I heard Super Mario Bros. is the best-looking game on this emulator, I decided to see how well this worked. Considering the backgrounds are simple and are clearly separated from the interactive objects in the worlds, it was quite clear what Geod Studio had in mind with this project, but it is obviously still a work in progress. Some polygons wouldn't fully render and Mario occasionally had half-a-face. Sometimes enemies wouldn't render at all, and I would be killed by what appeared to be nothing. Sounds and music were occasionally bit-crushed (accidentally, I'm pretty sure) or they were distorted to a point where they sounded like they belonged in a poorly-assembled MLG montage parody. Some objects appear to be stretched out and are in focus at the forefront of each frame, but backgrounds occasionally seem to exhibit some kind of motion blur. The algorithm was not very kind to a lot of these sprites.

Obviously, this project is nowhere near finished, and Geod Studio hopes to improve the functionality of games on this platform through subsequent beta releases. Trần Vũ Trúc of Geod Studio has plans to give each individual game the ability to be heavily personalized by its players, although this is definitely very far away. If all goes according to Geod's plans, then this beta will be the only release through this WebGL Unity Player platform, and all future releases will be available in an executable format.

Although the 3DNES is nowhere near the update your nostalgia so desperately needs, it's definitely a start. It appears that Geod has very ambitious plans for this emulator, and if they continue as planned, this project should be nothing short of revolutionary. The games look terrible, there is no arguing that, but they do function as they're supposed to. Maybe with a little more money and a little more time, the 3DNES will begin a trend of emulators that successfully imitate the inherent nostalgia that comes with playing your favourite NES game, while also providing a contemporary twist to hold the experience together. For now, though, it's in a sad, shriveled state, and it's probably best if you just wait for further news.