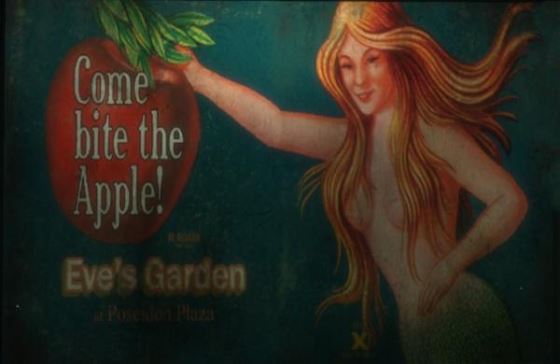 Just earlier this morning, 2K United Kingdom made a BioShock-related teaser via Twitter. The teaser itself includes the picture above with the caption, “Oooo, what COULD this mean?!” Giving no extra hints, the teaser leaves the community open to suggest an answer to the developer’s question. Most people would agree, the obvious point of the teaser is to suggest new BioShock content in the coming future whether it comes in the form of DLC for Infinite or a whole new game entirely. Although the teaser seems sort of simple, the community can pull aspects from it to create a few guesses as to what is to come.

The image itself is an advertisement for Eve’s Garden, an exotic dancing venue (strip club) which lied within Fort Frolic in the city of Rapture. Eve’s Garden could be explored by the player in the first BioShock and to some, seemed like a very insignificant area plot-wise. For example, it was fairly small and did not contain any “special” hidden items per se. What does make Eve’s Garden important is not the venue itself, but who worked inside and visited there. One of the most well-known workers in Eve’s Garden was Jasmine Jolene, who was Andrew Ryan’s mistress. In the first BioShock, the player will see Jasmine’s ghost and be able to find an audio diary labeled “Pregnancy” which can really tickle the player’s fancy with ideas. The point is that the character the player controls, Jack, is the illegitimate son of Jasmine Jolene and Andrew Ryan.

With these ideas in mind, I come to think that the next BioShock content/game will feature events from Rapture’s better days. Within Burial At Sea Part 1, we get to see a small part of that life. Within Burial At Sea Part 2, we get to see the beginning of the civil war. Within BioShock 2’s multiplayer, we get to basically see the civil war going on. Within BioShock, BioShock 2, and Minerva's Den, we get to see after the fall of Rapture. In my opinion, seeing as other time periods have been covered well, we need to see more of the early-Rapture. Also, seeing as Eve’s Garden makes allusions to the story of Adam & Eve (Christianity’s story of creation and “fall of man”) and origins in general (Jack may very well have been conceived in Eve’s Garden), we may get to see the origins of Rapture, Ryan, Jack, and/or all of the other familiar faces. Now that Irrational Games is not involved directly with the franchise, I trust that 2K won’t mess things up. My fingers are crossed.

I want to thank Sparfire and Adzee for passing this information on to me. I’m going to go splice-up now.